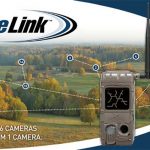 Trail cameras are the most significant and helpful hunting tool to come along in the last 20-plus years, but they also had their drawbacks – until now. Cuddeback, the industry leader in fast, affordable and quality trail cameras, has solved the biggest trail camera problem: How to check multiple cameras without disturbing your hunting area.

Cuddeback’s new CuddeLink system finally allows users to check multiple trail cameras (up to 15) on a property from one home camera. CuddeLink is not cell service or Wi-Fi. It’s a proprietary wireless mesh network that allows the cameras to communicate with each other, pulling the photos from all the cameras in the system to one home camera.

CuddeLink is built around the top-of-the-line CuddeLink cameras, available in IR, Black Flash and Dual-Flash models, each with Cuddeback’s legendary ¼-second trigger speed. Each camera reaches out and communicates with the other cameras in the system, automatically working together to cover an entire property, whether a few hundred acres or a few thousand. When you check the CuddeLink home camera, you check every camera in your CuddeLink system.

While it might sound complicated, CuddeLink cameras are designed for easy setup, automatically communicating with the other cameras in the system. Simply designate one of the cameras as the home camera and give each camera your desired picture-taking settings, just like an ordinary trail camera.

Unlike ordinary cameras, CuddeLink allows users to check photos more conveniently by placing the home camera in the most convenient location, such as a parking spot or even in a building. Because you check only one camera, you can get your photos more often, even numerous times per day, without disturbing your hunting area. And because the CuddeLink system uses a radio mesh network, there are no cell phone data plans to buy, and no data caps to worry about.

Imagine the ability to frequently gather the pictures from your most remote and sensitive camera sites without going anywhere near those cameras and without paying cell data fees. No longer will it be taboo to place, and frequently check, a camera at a giant buck’s bedroom door. No other system offers the ability to wirelessly monitor multiple cameras, and no other system provides CuddeLink’s level of real-time scouting, especially without monthly cell data bills.

For more details on the amazing new CuddeLink cameras and wireless scouting system, visit Cuddeback.com. While you’re there, check out the Cuddeback accessories that can add PC and internet connectivity to your CuddeLink system.

Founded in 1989, Cuddeback is the world’s oldest trail camera company. While other companies dabble in trail cameras, Cuddeback continues to set the standard for performance, durability, innovation and price. All Cuddeback cameras are designed in the United States by hunters who understand hunting and scouting. At Cuddeback, their goal is to make trail cameras that capture every animal, not just those standing still. That’s why they use state-of-the-art electronics to ensure our industry-leading 1/4-second trigger speed.
For more information, please visit
WWW.CUDDEBACK.COM