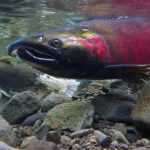 Daily bag limit is two coho salmon, six in possession, and there is no season limit for 2019. Anglers must have a valid salmon permit.

Coho salmon with or without an adipose fin can be harvested. Please be aware that steelhead and fall Chinook salmon occur in these waters and anglers should know how to identify these three species. For full season and rules information see the coho fishing rules webpage.

Coho anglers should keep their eyes out for a new state record fish. The catch-and-release record for coho is still vacant, and the certified-weight coho record is 11.75 pounds. To submit a weight record, the fish must be weighed on a certified scale. Here’s information about how to submit a state record.

Coho were reintroduced into the Clearwater River system by the Nez Perce Tribe, and Idaho held its first coho sport fishing season in 2014.