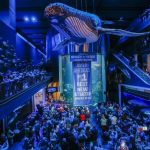 Springfield, MO – Johnny Morris’ Wonders of Wildlife National Museum and Aquarium, the largest, most immersive fish and wildlife attraction in the world, has been voted as America’s Best New Attraction. Individuals across the country made their voices heard by voting in the national contest, propelling Wonders of Wildlife to the top of the list and bringing national recognition to the Ozarks.

Nearly ten years in the making and unprecedented in scale and scope, Wonders of Wildlife is the most important natural history museum to open in America in more than a century. Larger than the Smithsonian Museum of Natural History, the not-for-profit conservation attraction serves as an inspirational tribute to the adventurers, explorers, outdoorsmen and conservationists who helped discover, develop and preserve the nation we love. The Museum is located in the heartland of America where half of the nation’s population lives within a day’s drive.

“We are honored that Wonders of Wildlife has been voted America’s Number One Best New Attraction,” said Bass Pro Shops founder Johnny Morris, noted conservationist and visionary behind Wonders of Wildlife. “This recognition is a tribute to hunters, anglers and conservationists everywhere whose significant contributions have been protecting our nation’s fish and wildlife for generations. We are deeply grateful to all of the remarkably talented artists, craftsmen and women, leading conservation organizations, biologists and other supporters who contributed to the creation of this facility, and to each and every person that voted – thank you!”

Wonders of Wildlife was nominated for USA TODAY’s 2017 Best New Attraction contest by a panel of nationally respected travel experts as part of the Reader’s Choice Awards. Americans were invited to cast their vote every day to determine a winner. According to contest officials, Wonders of Wildlife received more votes than any other nominee in any category the publication held in 2017.

“In the days ahead, conservation faces many challenges. The Wonders of Wildlife National Museum and Aquarium is the hub that allows us to address these challenges by bringing together our conservation community and the pubic to learn and appreciate our wonderful natural resources.”

“Johnny’s spectacular Wonders of Wildlife National Museum and Aquarium in Springfield is designed to introduce millions of families to the full diversity of wildlife with which we are blessed. Simply put, Wonders of Wildlife is the most important facility in America promoting the future of fish and wildlife”

“In today’s world, hunters, anglers, and conservationists are often misrepresented, and Wonders of Wildlife is the single-handed greatest effort that can change the narrative. John L. Morris is a conservation icon and my personal hero for all he has done, and continues to do for all of God’s creations.”

“I applaud Wonders of Wildlife Museum and Aquarium, the most significant natural history museum in modern times…Safari Club International recognizes the critical need for places like Wonders of Wildlife to relay to the world the importance of humanity’s hunting culture and how hunters, using science-based sustainable resource conservation efforts, can help assure healthy wildlife populations forever.”

“Wonders of Wildlife underscores the possibilities of what we can achieve in conservation by working together.”

About Johnny Morris’ Wonders of Wildlife National Museum and Aquarium

USA TODAY is a multi-platform news and information media company. Founded in 1982, USA TODAY’s mission is to serve as a forum for better understanding and unity to help make the USA truly one nation. Through its unique visual storytelling, USA TODAY delivers high-quality and engaging content across print, digital, social and video platforms. An innovator of news and information, USA TODAY reflects the pulse of the nation and serves as the host of the American conversation – today, tomorrow and for decades to follow. USA TODAY, the nation’s number one newspaper in print circulation with an average of more than 1.6 million daily, and USATODAY.com, an award-winning newspaper website launched in 1995, reach a combined 6.6 million readers daily. USA TODAY is a leader in mobile applications with more than 16 million downloads on mobile devices. USA TODAY is owned by Gannett Co., Inc. (NYSE: GCI).