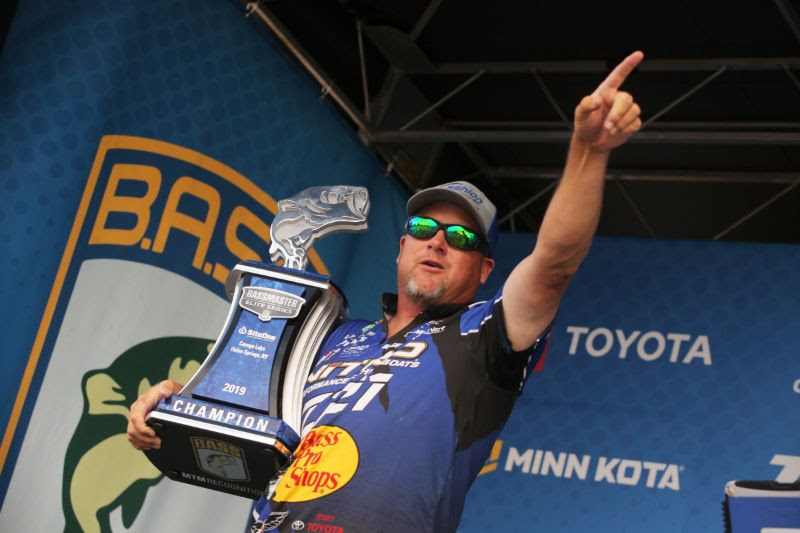 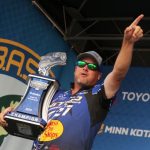 Both were special. But he couldn’t deny this one meant just a little more.

Fishing in his home state of New York, Hartman caught five bass that weighed 22 pounds, 4 ounces Sunday and jumped from fourth place into the winner’s spot at the SiteOne Bassmaster Elite at Cayuga Lake with a four-day total of 80-13.

After all the bass had been weighed, Hartman carried the blue trophy into a boisterous crowd of fans who were eager to hug and high-five their hometown favorite. It was a stark contrast to the celebration he was basically denied when he earned his first victory two months ago at Lake Guntersville and a severe thunderstorm rolled through just as he was handed the trophy.

“It just couldn’t be any better than this,” Hartman said. “For it to happen right here in my home state with all of my family here, it’s incredibly special.

Hartman was one of the few anglers all week whose trajectory was consistently headed upward. He caught 16-14 Thursday, 19-9 Friday, 22-2 Saturday and 22-4 Sunday.

He spent all week fishing with two baits — a 4.75-inch Synth Worm from Riot Baits in green pumpkin neon on a drop-shot rig and a shad-colored crankbait he said is no longer in production.

He said his weights went up every day because he slowly learned the sweet spots of the area he was fishing on the North end of the lake.

“I had found a place on the South end during practice that was just loaded with them,” he said. “That’s where I started, and they just weren’t in there. I left there with only about 14 pounds and went back up to one little area of grass I found back up North.

“I decided to stick with that the rest of the week, and I learned which parts of it I needed to be fishing and which ones I didn’t have to bother with.”

Hartman said the green pumpkin neon pattern, which is a two-toned worm with green pumpkin on one side and chartreuse on the other, seemed perfect for the water color at Cayuga. He dyed the tail chartreuse to add even more color.

His crankbait bite was best when there was at least a little wind blowing. So, when he found slick calm conditions Sunday morning, he panicked and decided to run to the South end of the lake in an effort to catch one more big bass fishing boat docks.

After fishing 15 docks without a bite, he ran back North.

“As I was running to the South end, I could see that wind was finally putting a little bit of a ripple on the water,” Hartman said. “I started to just turn around and go right back to fish the crankbait. But I knew I would be able to tell pretty fast if the dock bite was happening — and it wasn’t.”

His decision to leave the docks proved to be the right one as he quickly landed a 4-pounder on the crankbait that put him over the top.

“Everything happens for a reason,” he said. “If I don’t make that run to the South — if I just stay where I was — maybe I don’t catch that 4-pounder. It worked out just right.”

Without that final big fish, Hartman would have come up short at the scales. His final total of 80-13 was just 10 ounces better than that of second-place angler Jeff Gustafson (80-3) and less than 2 pounds better than third-place pro Chris Zaldain (79-0).

Hartman’s second $100,000 first-place check of the season brought his career earnings with B.A.S.S. to just over $458,000. He only joined the Elite Series three years ago, and he missed several tournaments last season with back issues.

“This is all I’ve ever wanted to do — and to have this happen here today in New York, is literally my dream coming true.”

The Phoenix Boats Big Bass award of $1,500 went to Derek Hudnall for the 8 pound, 1 ounce giant he landed on Day 1 of the tournament.

About B.A.S.S.
B.A.S.S. is the worldwide authority on bass fishing and keeper of the culture of the sport, providing cutting edge content on bass fishing whenever, wherever and however bass fishing fans want to use it. Headquartered in Birmingham, Ala., the 510,000-member organization’s fully integrated media platforms include the industry’s leading magazines (Bassmaster and B.A.S.S. Times), website (Bassmaster.com), television show (The Bassmasters on ESPN2), radio show (Bassmaster Radio), social media programs and events. For more than 50 years, B.A.S.S. has been dedicated to access, conservation and youth fishing.